The demonstrators cut off the streets leading to Kaltix round area, Khur Maksar, Sheikh Othman and Al-Qassr street, and they raised banners demanding the expelling of coalition government and Presidential Riyadh Council.

The Independent Aden Youth Bloc has on Wednesday called for a revolutionary escalation and an angry protect on Thursday afternoon across Aden and the rest of the coalition-controlled southern provinces.

In a statement, the bloc called on the angry protesters to continue their marches until their demands were met, including providing basic services from Aden’s resources and wealth.

The bloc denounced the statements issued by the Saudi-led coalition’s officials and the president of the Riyadh-formed Presidential Council, saying “the coalition’s statement is nothing but a deceitful act to absorb the anger of the people and silence messes who came out in the past days”.

“The statement by the head of Riyadh-formed Presidential Council was only propaganda that has nothing with any movements on the ground in addition to the absence of basic services such as electricity in the city. But, the insistence of the government and the Leadership of Council have increased the price of oil derivatives, as if they were enjoying our punishment, suffering and pain,” the bloc’s statement read. 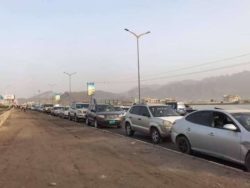 The bloc accused the coalition countries of lying and failure to meet their financial commitments, which were supporting the Bank of Aden, saving the local currency from collapse and improving the economic situation.

It demanded the expulsion of the government from Aden and the rest of the southern provinces, and leaving its interventions in Yemeni affairs once and for all.

In related issue, the Petroleum Company in Aden has pumped quantities of poor fuel quality into several stations in the city.

According to the sources, the citizens rushed to fill up the tanks of their vehicles with fuel from the oil company’s stations.

The sources explained that the citizens complained that their cars suffered problems and failures due to the use of contaminated fuel, which resulted in wear, premature engine failure and decreased performance

The sources pointed out that after the examination of their cars it became clear that the fuel was carrying an unusually strange color that would destroy the engines.

In the context, hundreds of people organized car protest along the sea road from Khormaksar directorate to Mansoura directorate, in protest against fuel price rises, in addition to the fact that the quantities the fuel do not conform to applicable specifications.

The Saudi border guards committed on Wednesday a new crime against a Yemeni youth in the border Jizan region. Informed...

State of Alert Announced in Aden