Aden’s Govt’ Plunder 4,910 Scholarships for their Children at a Cost of $8 million

During Three Weeks, over 100 Civilians Killed, Injured due to Saudi Shelling on Saada

Three Citizens Injured; Car Destroyed due to Mine Explosion in Hajjah

The documents revealed that Aden’s government looted 4,910 scholarships for their children at a cost of $8 million.

The documents revealed the acquisition of the children of ministers and official the list of scholarships granted to Yemen abroad, and showed how the Aden’s government acquired scholarships for their families and children.

The documents sparked widespread controversy and condemnation on social media platforms and the media. The leaked documents showed that the children and grandchildren of the Saudi-backed government acquired scholarships and allocated sums of money in hard currency to them monthly.

It revealed the monopoly of Rashad Al-Alimi and Yassin Saeed Noman, and the relatives of the Moeen Abdul-Malik, in addition to a number of senior officials appointed to ministerial positions, ambassadors and advisors. 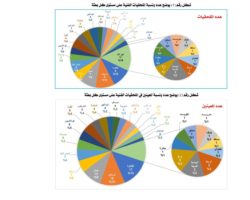 Only 50,000 Passengers Traveled through Sana’a Airport during the UN Truce: Sana’a Says