Saudi forces in Aden opened fire in an attempt to disperse protesters gathered near the central bank of Aden, who are protesting against “policy of starvation, Yemen Press Agency reported on Tuesday.

According to local sources, Saudi forces and its loyal factions guarding the central bank fired indiscriminately from machine guns in an attempt to prevent the protesters’ storming of the city’s central bank.

This came as protest in the UAE- backed Southern transitional Council (STC- held city) amid signs that the city is sliding into a new quagmire of chaos.

Since Monday evening, Aden has been the scene of a wave of protests against the deteriorating services, particularly electricity, and the collapse of the local currency amid a continued ban on salary payments.

According to pro-STC media, the explosions were a result of “sound” bombs thrown by unknown assailants at the headquarters of the National Bank and police stations in various areas. 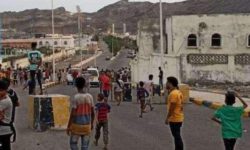 The sources affirmed the protesters stormed the Palace amid popular anger over the lack of services, difficult living conditions and collapsing the local currency.

They chanted slogans against the Saudi-led coalition and the Southern Transitional Council militias, which has controlled the city since the Saudi-exiled Hadi government” was expelled in August 2019.

The protesters blocked all roads leading Maasheeq Palace in the Crater area, setting fir on tires, in protest against the deteriorating living situation and basic services in the city.

According to the sources, the “Southern Transitional Council militia fired at the protesters near the National Bank.