Capital Sana’a Witness Largest Wedding in the Region for More than 10,000 Groom, Bride

The capital, Sana ‘a, witnessed Monday the third and largest collective wedding in the region, organized by the General Authority of Zakat, for 10,000, 44 groom and bride.

At the ceremony, the Yemeni Mufti, scholar Shams Al-Din Sharafuddin, blessed grooms with their marriage.

He said: “This blessed day demonstrates the keenness of the revolutionary leadership represented by Sayyed. Abdulmalek Badruddin Al-Houthi, which has paid much attention to the poor and the needy, and always focuses on this aspect.

He called on decision makers, local authorities, elders and seniors to seek charters and contracts to reduce dowry overreach. 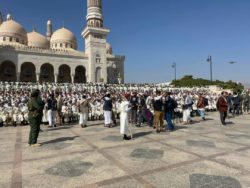 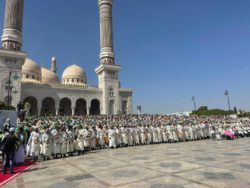 He called on everyone broad social attention, along with the issue of eliminating people’s needs.

Yemen’s Mufti praised the role of the General Zakat Authority and all those who participated in and contributed to the support of this charitable and humanitarian social project.

At the public ceremony, the President of the General Authority of Zakat, Sheikh Shamsan Abu Nashtan, congrats the grooms with their wedding in the largest collective wedding in Yemen, which includes 10 thousand 44 grooms and brides from various provinces.

Abu Nashtan pointed out that the festival of the collective wedding, repeated for the third year with this momentum, to fortify a constellation of Yemen’s youth under the auspices and support of the leader of the revolution, Mr. Abdulmalik Badruddin Al-Houthi, President and members of the Supreme Political Council and members of the Salvation Government.

The head of the Zakat Authority considered the Collective Wedding Project to be one of the 17 projects launched by the Authority on the occasion of the anniversary of the holy Prophet, the cost exceeded 10 billion and 350 million riyals.

He valued the role of finance, business, merchants, owners and obligors to pay their money zakat, which through their sincerity and payment of their zakat the Authority is launching dozens of projects according to the legitimate zakat banks.

Saudi Arabia sent on Thursday new military reinforcements to the city of Aden, southern Yemen, amid final moves to...

Three Children Killed and Injured in Explosion by Remnants of War

Because of Blockade, Death Threatens 40,000 Sickle Cell Patients in Yemen

Aden PM Warns of Bankruptcy of His Government

Truck Drivers Strike Continues in Mukalla due to STC Taxes