Like other countries, Yemen marked the International Day against Drugs, on Sunday, but this does not mean that the country which has been subjected to war and siege for eight years, and drugs are brought into it, as a despicable regional weapon, he rejoiced that he was free of this satanic plant, so how did Yemen look like on this day?

The security authorities announced in Sana’a, the destruction of the largest number of drugs and hashish. This quantity was seized in areas under the control of the rescue Government, in northern Yemen. It is the only security- coherent part of the country torn apart by the coalition.

This amount, according to official data, amounted to 40 tons of hashish about two million Captagon pills destruction ceremonies held in the presence of the media.

The quantity reflects the scale of the battle that regional parties leading a war for 8 years have been trying to drown Yemen in, and identify the northern part, where it failed to break the solid mass militarily, but it seems that the security vigil had another response. 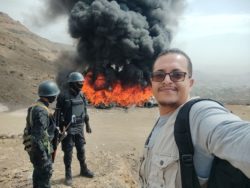 As for Yemen, particularly in the south and east, there has been talk about the spread of drugs in the streets of cities and the alleys of popular neighborhoods on a daily basis, where the media is circulating, there are frightening stories about a gang war in the streets of Aden and liquidations reached the limit of using security factions that was supposed to be the first line of defense on citizen.

In Hadhramaut, activists circulated a “horrible” video clip of addicts; this forced the authorities there to announce the closure of two of his factories in Seiyun and Mukalla.

In fact, the cities of the south, east and west coast, and the identification of the part subject to the coalition, are not free from the spread of drugs, and the most dangerous thing in the matter is the spread of “Shabu” trade.

It is a new product in the local market that is sold by daylight with the support of influential people in those areas, they are trying to benefit from its profits, unaware of its frightening repercussions, whether on the individual or the family, this substance, according to laboratory analyzes, is easily traded because it is similar to candy, and the most dangerous thing about it, is that it is tasteless or odorless, also,  the addiction according to medical reports, is from the first taste and there is no cure for it so far.

This article, according to media reports, was a major reason for the spread of crime, especially within families, its users turn into mere human monsters who can commit crime without even remorse, security investigations in Aden, Taiz and Hadhramaut revealed the extent of the danger of this substance, as part of the motives for the terrible crimes in those cities.

In fact, the responsibility of the security services in the face of danger may be great, especially in light of the eight-year war, with limited resources, but whatever remains on the shoulders of the family, which is first and foremost with its greater fire, to confront the spread of the scourge and protect their children from drowning in his swamp.

Border Guard forces of Sana'a government recently held a graduation ceremony for the latest batch of military recruits in...

Full Details of YOU Company Suspension Case in Aden

US Military Spy Plane Shot Down in al-Mahra