Sana’a Calls on UN to Pressure “Other Party” to Open Main Corridors, Roads

“In a strategic operation, we targeted deep inside the UAE territory,” said Brigadier General Yahya Saree, after a blast was reported in Abu Dhabi.

Sana’a forces used as many as 20 UAVs and 10 ballistic missiles struck targets deep in the UAE, Lebanese Al-Mayadeen quoted special sources as saying.

Military operations continue in the heart of Abu Dhabi and plumes of smoke could still be seen over the city, the Al-Mayadeen report added.

The spokesman added an important statement that will later give the details of strategic military operations deep inside the UAE in the coming hours.

The remarks came a few minutes ago when the media reported the explosion of three oil tankers in the Muṣaffah district in the UAE. The blast was followed by a large fire in the al-Muṣaffah area and parts of Abu Dhabi airport.

Al-Muṣaffah is an industrial area located southwest of the UAE city of Abu Dhabi. Abu Dhabi police confirmed the news of the explosion in the area, saying: “There have been no reports of possible damages in the fire in Muṣaffah.”

Today’s attack came a few days after Mohamed al-Bukhaiti, a member of Yemen’s Supreme Political Council, warned the UAE not to continue its aggressive moves in the south of Yemen otherwise it would be targeted deep inside its territories by Yemenis.

The latest reports show that three people were killed and six others were injured in the Abu Dhabi attacks.

In this regard, President of pro-Houthis Supreme Political Council (SPC), the highest ruling authority in Sana’a, Mahdi al-Mashat, blessed the qualitative operation of the Armed Forces that targeted the Emirati territory in Abu Dhabi.

Al-Mashat made it clear that this qualitative operation comes within the framework of the legitimate right of the Yemeni people to confront the “aggression” in accordance with national and international laws.

He stressed that if the “aggression” and its series of crimes and attempts to occupy Yemen continue, this will pose real risks to investment and the economy in the UAE in the future.

President of Sana’a SPC stated that this qualitative operation represents a message to the UAE regime about the danger of continuing its war against Yemen, and also reflects the advanced level reached by Sana’a armed forces and their strategic deterrent weapons.

For his part, Mohammed Abdulsalam, Spokesman of Yemen’s Anssarallah Movement and senior negotiator of the Sana’a Salvation Government, commented on the qualitative military operation carried out by the Yemeni army forces in the Emirati territories depth.

Abdulsalam tweeted on Twitter, describing the UAE as “A small state in the region that is desperate to serve America and Israel. It had claimed that it had distanced itself from Yemen, but it was recently exposed, contrary to what it claimed.”

He added that the UAE “must hasten to stop its hand from tampering in Yemen, or it will face the one who will cut its hand.”

Meanwhile, Member of Sana’a negotiating delegation, Abdul-Malik Al-Ajri, affirmed that the bombing operation against UAE is a prelude by the Yemeni army to deter Abu Dhabi.

Al-Ajri indicated in a press statement the UAE fell into an American-Israeli-Saudi trap for returning to the front in Yemen.

He pointed out that the recent Emirati move in Yemen brought it back to the front and it could not withstand intense strikes such as Saudi Arabia suffered. 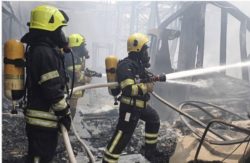 “Self-distancing policy announced by the UAE appeared to be a lie and a deception internally and regionally,” Al-Ajri added, stressing that the UAE is a small servant of the Americans and Israelis and they cannot be trusted even at the regional level.”

He continued, “After approaching the liberation of Marib, the Americans have pushed the UAE to return and move in Yemen, and this proves that it is a tool for the head of the real alliance, of America and Israel entity.”

An organization known as the Eekad Platform has on Sunday revealed new details about military establishments on the Yemeni...

Houthis Vow with Humiliating End to Any New Escalation